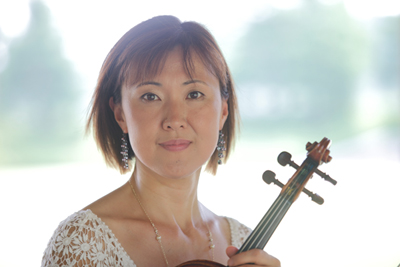 World-renowned violinist Etsuko Kimura has been Assistant Concertmaster of the Toronto Symphony Orchestra since 2007. Known for the passion, energy and imagination that she brings to her music, Ms. Kimura appears frequently at concert halls across Canada and the world, leading eminent chamber ensembles, appearing as a featured soloist with major international orchestras, and maintaining a full recital calendar. Her recordings are often heard across radio networks like the CBC, and the Toronto Star has praised her “thirst for making music.”

Ms. Kimura has led numerous premier ensembles as concertmaster over the years, including the Kobe City Chamber Orchestra in Japan, and Sinfonia Toronto, the world-class chamber ensemble. Since 2011, she has served as Concertmaster of the Ontario Philharmonic Orchestra, one of the province’s leading ensembles, led by acclaimed music director Marco Parisotto. She is also the Concertmaster of Toronto-based chamber orchestra Group of Twenty-Seven (g27), where she performs alongside many of Canada’s top classical musicians, under maestro Eric Paetkau. When she is not performing with the Toronto Symphony Orchestra, she serves as a guest concertmaster for orchestras in Japan and around the world.

In addition to her work as a concertmaster and ensemble leader, Ms. Kimura has performed extensively as a soloist, giving frequent solo recitals and collaborating with many of the world’s best musicians, musical directors, chamber groups, and orchestras. She has performed as a guest artist with the Budapest Ferenc Erkel Chamber Orchestra and the Szombathely Radio Orchestra in Hungary, as well as with orchestras throughout Japan, including the prestigious Osaka municipal symphonic band. A highly sought after collaborator, she has appeared on stage with such eminent violinists as NHK Symphony Orchestra concertmaster Masafumi Hori, former Berlin Philharmonic concertmaster Toru Tasunaga, and international soloist Tomotada Soh, and performed with Nobuo Okada, the former principal violist of the Bamberger Symphoniker-Bayerische Staatsphilharmonie.

Born and raised in Japan, Ms. Kimura began playing music at the age of four. She studied violin performance with Tomotada Soh, earning Bachelors and Masters degrees at the Osaka College of Music and graduating at the top of her class. In 1992, Ms. Kimura was catapulted onto the international stage as the winner of the 24th Joseph Szigeti International Violin Competition, and began to receive invitations to play recitals in Tokyo, Osaka, and throughout Japan. The following year, she won a scholarship from Japan’s Rohm Music Foundation to study as a special post-degree student at the University of Toronto with Lorand Fenyves, widely considered to be one of the world’s best violin instructors. She also studied at elite workshops such as Hungary’s Bartok seminar, Switzerland’s Rohm Music Foundation camp, and Canada’s Banff Centre camp. In 1997, she moved permanently to Canada, where she has become known as one of the country’s most compelling musicians.

Ms. Kimura currently teaches violin performance at the University of Toronto. In high demand as an instructor, she leads master classes all over the world in violin performance and chamber music, as well as teaching students at Canada’s Interprovincial Music Camp and in workshops at schools worldwide. Ms. Kimura stands out as a musician who is not only a virtuoso performer, but also one who is highly involved in bringing music to the community: she participates in the Toronto Symphony Orchestra’s “adopt-a-player” school outreach program, as well as performing regularly at hospitals and other venues where she can use her musical talent to touch lives.