Phantom of the Opera an achievement in organist’s hands 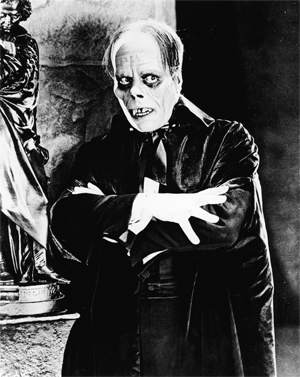 Lon Chaney in the title role in The Phantom of the Opera (1925).

Silent film? The expression is inevitably a misnomer, as the Toronto organist William O’Meara demonstrated over the weekend in the Maison symphonique by improvising an accompaniment on two successive evenings to the 1925 Carl Laemmle production of The Phantom of the Opera.

Whether the experience was taken as primarily musical or cinematic, it was an achievement. Think of it: More than 90 minutes of music, each note tailored to the visuals, with no pre-composed score to rely on, no margin for error and never more than a moment of rest. Playing a blockbuster piano concerto, by comparison, is a stroll in the park.

Which is not quite to say the experience on Saturday was satisfying on every level. This movie is rich in shadows and subterranean visuals, short on characterization and coherence. Only when Lon Chaney, in the title role, expressed his inner wish for redemption did we encounter a human personality we could relate to.

Otherwise something dire was always about to happen, and harmonies necessarily followed suit. Happily, O’Meara was conscious of the various increments of scary and unleashed the full strength of the organ where most appropriate, as in the chandelier crash, the unmasking of the phantom and the chase sequence at the end.

Most of the thematic material was original, although there was a tip of the hat to Andrew Lloyd Webber, and when Christine sang the Jewel Song as Marguerite in Gounod’s Faust, this was naturally the music on offer. I heard some traces of the Widor Toccata in a pulsing figure O’Meara used occasionally to convey narrative motion. Maybe also a lick from Liszt’s Les Préludes.

No doubt such allusions were common in the 1920s. And this was, above all, a recreation of that sort of experience. Wearing a showman’s cape and playing under a spotlight from the stage console, O’Meara attracted hearty applause. The Grand Orgue Pierre Béique can do many things well. Imitate a theatre organ is one of them.

Artifact of old Hollywood hauled from the grave 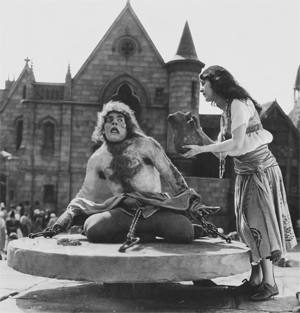 Lon Chaney in the title role of The Hunchback of Notre Dame (1923).

Church organists are solitary by trade, though on occasion they herd together in large numbers. A pack of them went to the movies together Wednesday evening, to hear one of their colleagues play a live accompaniment to a 1923 silent film at Toronto’s Church of the Holy Trinity.

It was an eerie and wonderful scene, no doubt the most offbeat event of the current national convention of the Royal Canadian College of Organists. Organist William O’Meara improvised a non-stop accompaniment to The Hunchback of Notre Dame, at a screening in the old church that ended minutes shy of midnight.

Live organ accompaniments used to be common at the movies, until the advent of talkies put thousands of theatre musicians out of work almost overnight. O’Meara, who lives in Toronto has made a special study of the craft of the theatre organist. The pursuit seems a timely one, when legions of musicians are trying to revive the “authentic” practices of periods far more remote.

O’Meara could hardly have picked a better showcase than The Hunchback of Notre Dame, a brutal gothic melodrama cast on an epic stage. Quite apart from the scenes in the cathedral, many episodes of this Lon Chaney classic beg for music on a grand scale. It’s really an opera in mime, with tumultuous crowd scenes and visceral confrontations.

The highly polished improvisations seized on that operatic energy, and magnified it. When Chaney, in close-up, gaped in agony under the lash, the lion’s roar that burst from the organ seemed just the right size. Other effects added ghastly colour to the flickering screen images. Gloomy, sinister riffs followed the villain through the dark streets of Paris; nagging passage-work mimicked the squabbling of the murderous thieves; and a wild tangle of trumpets sounded as the hunchback choked the villain like a rat, and tossed him from the bell tower. When the gypsy Esmeralda began her tumbrel ride to the scaffold, O’Meara gave the scene what it clearly needed: the implacable rhythm of a funeral march.

Varied as it was, O’Meara’s performance also had a high degree of continuity. It was not just a pipe-organ version of a cartoon score, but a smooth progression of musical scenes. Sometimes the overlap of gracious music with a sinister image injected a note of irony that deepened the texture of the film.

At the end, I felt as though an artifact of old Hollywood had truly been hauled from the grave, and restored to all its savage vitality.

Interview and Review by Keping Qiu, correspondent for China Film News, about my accompaniment for the screening of the Chinese classic film The Goddess (1934) at the Toronto International Film Festival (TIFF), September 2014.